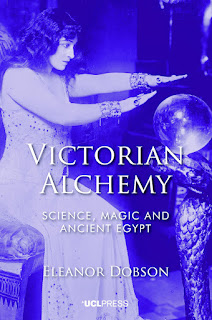 Victorian Alchemy explores nineteenth-century conceptions of ancient Egypt as this extant civilisation was being ‘rediscovered’ in the modern world. With its material remnants somewhat paradoxically symbolic of both antiquity and modernity (in the very currentness of Egyptological excavations), ancient Egypt was at once evocative of ancient magical power and of cutting-edge science, a tension that might be productively conceived of as ‘alchemical’. Allusions to ancient Egypt simultaneously lent an air of legitimacy to depictions of the supernatural while projecting a sense of enchantment onto representations of cutting-edge science.
Examining literature and other cultural forms including art, photography and early film, Eleanor Dobson traces the myriad ways in which magic and science were perceived as entwined, and ancient Egypt evoked in parallel with various fields of study, from imaging technologies and astronomy, to investigations into the electromagnetic spectrum and the human mind itself. In so doing, counter to linear narratives of nineteenth-century progress, and demonstrating how ancient Egypt was more than a mere setting for Orientalist fantasies or nightmares, the book establishes how conceptions of modernity were inextricably bound up in the contemporary reception of the ancient world, and suggests how such ideas that took root and flourished in the Victorian era persist to this day.
Free download: https://bit.ly/3Czkeu3